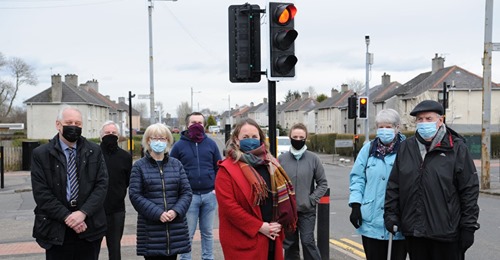 Local campaigners in Burnside are delighted at the success of their campaign to replace the mini-roundabout at the dangerous junction between Dukes Road, Hawthorn Walk and Calderwood Road with traffic lights. The campaign was started after a series of injury accidents at the junction in 2019.

“The shops at Calderwood Road are a meeting point for young people from Cathkin, Trinity and Stonelaw High Schools, particularly at lunchtime. There is also Eastfield Lifestyles down the road. This is a very busy location and getting across the various roads used to be a big challenge for children.

“It was really very risky. You just came round the corner and the vehicles were on you. People coming to the shops seemed to drive too fast, especially since Covid. To be honest, I think it needs a 20 mph restriction too.”

Rutherglen South Liberal Democrat Councillor Robert Brown, who worked with the residents to campaign for the traffic lights, said local people were pleased with the outcome. He went on:

“To my mind, this was the most difficult junction in Rutherglen – made worse by a blind corner as you came down from Hawthorn Walk. It had become a major throughway for traffic coming down from East Kilbride to join the M74. Some cars seemed to think they could just charge though the mini roundabout with precious little regard for pedestrians or other traffic.

The spate of injury accidents in 2019 pushed the junction up the Roads Dept’s priority list and they agreed to provide traffic lights instead of the difficult mini roundabout. It is a major safety improvement for local people. Parents now have more confidence in letting older children cross the road going to school or to the shops. It is also a boon for older people who felt they were taking their lives in their hands in crossing to the shops or simply going for a walk.”